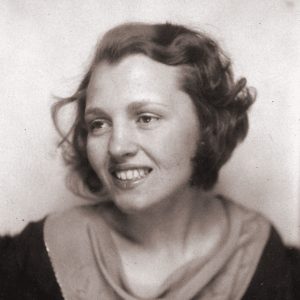 Marian Claire (Snow) Busey was born March 24, 1912, in Parma, Ohio and grew up on a small farm without running water or electricity. Her father, Clifton Frank Snow, later a postal superintendent, was descended from 1600s English settlers, several coming on the Mayflower. Marian’s mother, Ann Flett-Hay Thomson (Thompson) Snow, was from Scotland, with roots in the Orkney Islands. Art was always Marian’s passion. She started drawing at age 2, graduated from Cleveland Institute of Art in 1933, and attended The Ohio State University where she earned a B.Sc. degree in Education and an M.A. degree in Art Education.

In the 1930s, Marian taught art in public schools in the County systems of Ohio. She met James Lynn “Jim” Busey in 1941 while visiting the Gardens of Xochimilco, Mexico. He had been teaching school in a mine in Alaska and was studying Spanish. After the Japanese attack on Pearl Harbor, Marian traveled in 1942 to Fairbanks, Alaska, to marry Jim. During the War years while Jim was a U.S. Army Master Sergeant, Marian, now Marian Busey, worked in the Federal Building in Anchorage drafting maps of airfields in the Aleutian Islands. After the War, they moved to Ohio where Jim, under the GI Bill, completed his M.A. and Ph.D. degrees in Political Science. There Marian had her son Philip, born in 1947.

Jim joined the Political Science Department at the University of Colorado, first at Boulder and later at Colorado Springs (UCCS), and was promoted to Professor. Summers were often spent at other universities and Latin American cities where Jim studied governments. Marian was always sketching, so when she returned to Colorado the sketches became paintings. Their love of traveling led them to drive to Alaska five times, and travel in Europe and the South Pacific, along with hiking and camping in Colorado. In 1967, Marian and Jim had a house built in Manitou Springs.

Marian was a founder, in 1977, of Arati Artists Gallery in Old Colorado City, and, in 1988, the Pikes Peak Watercolor Society.  What she enjoyed most were 30-minute water media portraits, although she experimented with many different subjects and media and made innovations in print making. Marian participated in the weekly discussions of the local Philosophical Café, associated with the Pillar Institute for Lifelong Learning. Her long life may be attributable in part to more than 30 years of Water Aerobics classes at the Manitou Pool and Fitness Center. Though when asked, she attributed her long life and good health to red wine and dark chocolate.

Marian often mentioned her great romance with Jim. To celebrate their 50th Anniversary they drove back to Fairbanks, Alaska, where they got married a second time. They were together 65 years until Jim passed away in 2007. Marian Claire Busey remained active in the arts community until about one year before her death on June 2, 2018. She is survived by her son Philip Busey and her granddaughter Katharine Busey.